Huyang Tree – was created in Erjina, Inner Mongolia on the fringe of the Gobi Desert.  Funded by the Grassland Culture Foundation, our task was to promote tourism in the autumn when the National Forest of Huyang Trees become a brilliant yellow against the sand dunes and clear desert sky.   In 2010 the nearest public airport or train station for this village of 12,000 mongolians was a 10 hour drive across the desert, but it already became a favorite destination for photographers.   Conservation efforts including clean up, fencing and a raised boardwalk through the forest began hand-in-hand with efforts to showcase the forest’s beauty.

The Huyang Festival’s main attraction became the outdoor musical Huyang Trees.  Our goal was to share through traditional music and dance,  the local culture and history of Erjina.  As they say a Huyang Tree can live for 1000 years.  When it dies it may stand for another 1000 years.  When if falls it will still exist for another 1000.   The Huyang Trees were witness to the great history beginning when Zhang Qian rode through this forest on his way west, with the largest caravan in the history of the world.

His journey ignited the creation of the Silk Road and brought China to the outside world.

Our second tale told of the Homecoming Heros, the Tuerhute Mongolian tribe, who walked 1700 miles from Russia to return to their homeland, losing half of their population in the struggle.  It was near this forest in the 1700’s that the Chinese empereur gave them a safe home and they were allowed to hold fast to their Mongolian way of life.

The musical finished on a very personal note for the townspeople.  In 1955 the elderly still remember when China came to close their village and the Mongolian leaders agreed to relocate their village 140 kilometers north on the edge of this forest.  It was a great sacrifice but necessary for China to build their first space center and nuclear test site.  The villagers felt the potential of invasion from America and Russia was very probable at the time.  It was at this space center that Shenzhou V carried the first Chinese astronaut into space in 2005.

In my role as Artist in Residence at the Cultural Foundation, I worked with 40 singers and dancers, 20 extras (retired singers and dancers), camels, horses, homing pigeons, long-tune singers, double and triple tone singers (humai), horse-head fiddles, dapchur (2 string banjos) players and the most loving and loveable cast in my career.   Se Enke who grew up near Ejina in Alashan county composed the music.  My brother Ke Ming once again wrote the lyrics and with me, co-wrote the script.  We built a theater in the desert and their history came alive once again. 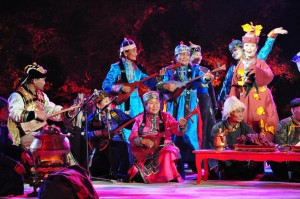 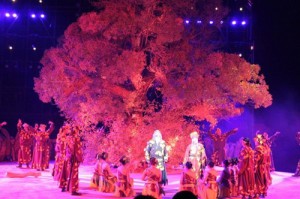 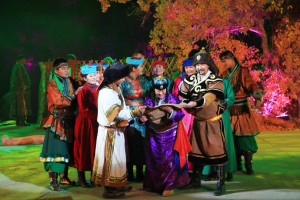 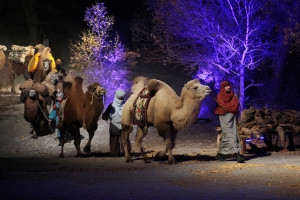 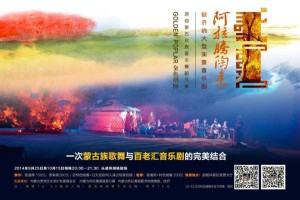 Pavilion for the Province of Inner Mongolia at the Shanghai World Expo 2010 was themed “BETTER CITY, BETTER LIFE.”  Believing that the city is built by mankind, developing and growing into a dynamic system, the theme centered on the faith that mankind is the most vigorous and creative being in this system, whose life is closely related to the pattern and development of the city.  As urbanization rapidly grows, this urban dynamic system and entire ecosystem have been affecting each other on a greater and deeper level.  Three systems, human, city and the Earth, are interrelated with one another and are merging into an inseparable unity.

The Film Experience included:  a 270 degree wrap around movie screen surrounding the audience with the complete Inner Mongolia experience; six projectors revealing the live film shot from three to seven cameras simultaneously, guaranteeing the audience a feeling of being amidst the grasslands; and music both recorded and live, from the voices of Inner Mongolia unlike anything heard by modern audiences.

The Exhibit included:  a double sided wall detailing the Ancient Community versus the Modern City; the modernizations of satellites, solar power, wind power and digital communications; the gift of Milk Tea to all guests; a scale model revealing the Model of the Modern City and its similarities to the Ancient Community; an interactive human-sized scale demonstrating the balance of city and country; a map informing the guests of the harmonious existence of both city and country; sound domes amplifying the various sounds of the Inner Mongolian grasslands; an hour glass with sand from the Gobi Desert counting down the hours of the Expo for the entire six-month run; a virtual experience of traveling the grasslands; and an interactive digital wall utilizing touch-screen technology.

The Ministry of Culture of Inner Mongolia decided that the three tales of “Huyang Trees” had special signifiante for 2011. It was the 90thAnniversary of the Chinese CommunisT Party and our musicals message helped share China’s historic past opening to foreign lands, the unification of the diverse Chinese cultures and the sacrifices required to make the country great.   They commissioned the Grassland Culture Foundation and Town Square Productions to create an expanded, theatrical  version of Huyang Trees to be performed in Beijing at the esteemed Poly Theatre during the national celebration.

Se Enke wrote eight new songs.  With Ke Ming, we expanded the dramatic elements of the stories into a full musical form.  From New York, David Caldwell arrived to provide ‘musical’ musical direction. In the absence of sand dunes and camels, Wang Kan Mei (born in 1952 his first name is literally translated as Against America)  created an expansive scenic design that took us from the Istanbul to Space.  While most of the cast came from the Inner Mongolia Song and Dance Ensemble, some of Beijing’s finest singers delivered the leading roles, and eight spirited dancers from Erjina gave the Tuerhute soul to the ensemble.

Crazy for You is a musical with a book by Ken Ludwig, lyrics by Ira Gershwin, and music by George Gershwin.

Billed as “The New Gershwin Musical Comedy”, it is largely based on the songwriting team’s 1930 musical, Girl Crazy, but also calls on the great Gershwin trunk for standards from the American songbook. Crazy for You won the 1992 Tony Award for Best Musical.

Following the eye-opening success of FAME, The Central Academy of Drama made a surprising pick for their second adaptation of the Broadway musical into the Mandarin language. Whereas the characters in FAME could easily be seen on a day to day basic at the Academy, CRAZY FOR YOU with the Gershwin Brothers and Ken Ludwig is as uniquely American as a musical can be – Broadway in the roaring 20’s, a Nevada ghost town, and a banker who wants to dance! The choice defied explanation until you know the backstory and one universal truth: Your First Broadway Musical can change your life!

Liu Hongmei is the Chairwoman of the Musical Theater Department at the Central Academy. Here is an excerpt from Liu Hongmei’s bio in the program. “In the spring of 1995, I was assigned by the Academy to study and perform musicals at the Shiki Theatre company in Japan. Crazy for You made me fell like receiving a baptism in musicals which I fell in love with ever since. I am fascinated by it and crazy for it.”

On the opening night in Beijing, Hongmei ran up to me and screamed with excitement. The translator channeled all of her emotion and also screamed the words, “Teacher Liu says she has been waiting 18 years for this night!”

Understanding how Hongmei was so closely attached to the show, we arranged for the license of the show to include the use of Susan Stroman’s original choreography
. Key to our success was the engagement of Kirby Ward, who starred in the London and later, the US National tour as Bobby. He knows this show step by step every step of the way. He began with a two-week tap dance master class in December, 2011 and selected the cast. During the winter he guided the design team and his associate directors by phone and Skype. In five weeks in April he worked his magic with Charles Czarnecki (music director) and Melissa Stern (assistant choreographer) and turned our junior year of Chinese students into Broadway showgirls and ghost town hicks. It was astonishing.

As China discovers the thrill of the American musical theater it feels right that they turn the spotlight on “Crazy for You.” In his review in The New York Times, Frank Rich wrote, “When future historians try to find the exact moment at which Broadway finally rose up to grab the musical back from the British, they just may conclure that the revolution began last night. The shot was fired at the Shubert Theater, where a riotously entertaining show called Crazy for You uncorked the American musical’s classic blend of music, laughter, dancing, sentiment and showmanship with a freshness and confidence rarely seen during.

The 2010 Shanghai Exposition sought to bring the world together – and so we did.  In Hohhot , the capital of Inner Mongolia, I was assigned to produce and direct The Promise, a one-hour original musical which would celebrate the Inner Mongolian Week at the Expo.   In Hohhot the singers and dancers had never seen a live musical before. Singers who danced, Dancers who sang, everyone who acted, it was all a discovery during an eight week rehearsal at the Hohhot Song and Dance Company.    We added eight acrobats and four horse-head fiddle players for more fun.

The story focused on a young Mongolian man who moved out of the Grasslands and left his sweetheart behind in search of a better life in the big city.   In fact the title of the Expo was “Better City – Better Life” but my Mongolian friends, proud of their heritage would not be inclined to say that a Better Life is in a Better City.   And so, as musical go, the young man realizes that Shanghai is not where his heart is.  The big city lights do not shine as bright as his sweetheart’s smile.  In the climatic number he walks down the Shanghai street and strips off his tie, hands off his suit coat, rolls up his sleeve and begins to strut – a Mongolian wrestler’s strut.  The crowd gathers and step by step they join this free spirit in the dance and song of his homeland.   He returns to the Meng Gu Bao (yurt) of his beloved and the musical sweeps to a close with the touching traditions of the Mongolian wedding ceremony. My chief collaborators were the grand Ulan Touga, composer and my brother, Ke Ming, lyricist, poet, inspiration and holder of the faith.   Two other Americans joined my in Hohhot:  Ann Marie D’Angelo choreographed and David Caldwell contributed vocal arrangements and music direction.  The three of us shared two translators as the cast sang and spoke in Mandarin.

Performed at the Central Academy of Drama in Beijing, this production of FAME was the first of its kind, and received International press with its recognition in “Variety”. Translated into the Mandarin language and performed by the students at the Academy, the production toured China during the 2009-10 season.