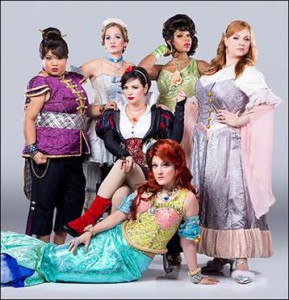 What would the ‘real’ Pocahontas, a circa 1616 ten year old, rough and tumble Powhatan girl, think of the 1995 Pocahontas – a deer pelt lingerie clad twenty something with a mane of long flowing hair? That’s what creator, Dennis T. Giacino, an ex-history teacher, often wondered
. A musician at heart, Giacino created a musical number skewering the princess pop culture that transformed Pocahontas from a revered American-turned-British princess into the pin-up girl vixen from the movies. Soon Giacino found himself finding a number of ‘princesses’ with similar complaints and DISENCHANTED! was born! The show was written over a three year period, and after several readings it started its sold out runs in May 2011 at the Orlando International Fringe Theatre Festival, where it was extended, and won The 2011 Producers’ Award. With the acclaim immediately reaching the internet, Giacino licensed the piece to other theaters in New York, New Jersey, Pennsylvania and Florida, all receiving the same accolades – sold out performances, standing ovations, extended runs and rave reviews! During the summer of 2013, the NYC cabaret version “Bitches of the Kingdom!”, provided the press with a preview of what the Off Broadway audience will experience in 2014 as DISENCHANTED! makes its way back to the Big Apple. Directed by Fiely Matias, Mr. Giacino’s collaborator for twenty years, DISENCHANTED!‘s workshop production at Stephens College in Columbia, MO allowed the creative team, Broadway Choreographer Matt West, Scenic Designer Gentry Akins and Lighting Designer Graham Kindred, the chance get a closer look at the what the show will look like when it reaches New York. “Riotous! ‘Bitches of the Kingdom’ boasts side splitting performances by a talented ensemble. Walt Disney would spin in his grave.“- New York Post “You’ll be enchanted with ‘Bitches of the Kingdom!’ Its concepts, conceits and songs appealed to everyone in a demographically mixed audience, regardless of ages, sexual orientation, ethnic background, height or weight … packed with a roaring, cheering audience. As for the performers, they are superstardom bound!“- Myra Charnin, Huffington Post “Hugely Entertaining. Giacino’s music is endlessly tuneful, with a musical theatre vivacity that is immediately attractive. His lyrics are clever, inventive, and rich with delightful, quirky notions and rhymes. The cast is the very model of musical comedy artistry.“- BistroAwards.com “People are tapping their feet as they laugh their heads off.“- Times Square Chronicles “Now’s your chance to catch a show that deserves a bigger life, whether it’s in New York or anywhere the celluloid Disney princesses have paved the way!“- Elizabeth Maupin, “On Theatre” Orlando Sentinel “Gut-busting! A Tour de Force of Composition and Pacing!“- Orlando Weekly “A laugh out loud joy ride of bouncy melodies goosed with plenty of snark, wit and cleverly delivered message of female empowerment! The hippest, hottest new musical in the country!“- Bradenton Herald “The songs are all incredible …there are too many highlights to pick just one! A fantastic musical sure to be the next big thing!“- Disney Dispatch “Catchy music and clever lyrics … you can’t help but feel that you are part of a show that is going places!“- Watermark News, Orlando FL “A spoof of the Disney princess personas, this musical comedy will entertain both fans of Mickey’s kingdom and critics everywhere!“- Orlando Sentinel

Past President of the New York Bar Association is his most acclaimed summation on Clarence Darrow. ALL TOO HUMAN tells the story of Clarence Darrow’s fight against religious intolerance, capital punishment, prohibition, the oppression of the workers and anything else which he felt impeded the bringing of enlightenment and culture to the human mind. He was the plain-speaking son of Mid-Western abolitionists who considered himself ‘a cunning actor like that other trial lawyer from Illinois, Abe Lincoln’. He argued and won many of the most famous cases ever brought to trial; defending the down-trodden and the a-moral; the maligned and the misguided; the obsessed and the oppressed; all human beings; all too human. His career and convictions re-defined the essence of the American legal system. In 1912, however, he was indicted for bribing a jurist. He hired the infamous Earl Rogers to defend him; but decided to deliver his own summation to his own jury. He won. Then came Leopold and Loeb followed the next year by a case in Dayton, Tennessee which became known internationally as the Scopes Monkey Trial.

Live on Deck! PIRATES OF PENZANCE is the classic Gilbert and Sullivan musical comedy. This production is being performed on a tall ship docked at the South Street Seaport Museum, and has been re-written for modern audiences.

This is a new version PIRATES OF PENZANCE, with a new book and lyrics by Michael Scheman, musical adaptation by Steven Gross, and choreography by Tony Parise. The story is the same, as are the melodies. This way, we make it accessible to modern audiences. Gilbert and Sullivan fans enjoy the show very much-they are the people in the audience who are singing along, and then start laughing hysterically when we get to a new lyric!

THE DREAM OF THE RED CHAMBER

“Song Li’s costume design was colorful and fabulous, especially the design for Madam Jia’s crown, which looked as impressive as Gong Li’s crown in the movie Curse of the Golden Flower.” – World Journal
“The dancer’s excellent dancing technique, the dazzling lighting, and the smart stage set design, all together, adapted this classic Chinese literature to a dance production on the stage in a tragically beautiful way. The marvelous production blew the audience away.” – Sing Tao Daily