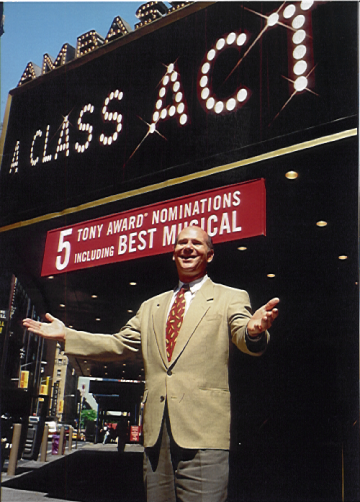 Don Frantz, owner of Town Square Productions, Inc., is an eight-year veteran of the Walt Disney Company where he was instrumental in creating Walt Disney Theatrical Productions and served as the Associate Producer of Broadway’s BEAUTY AND THE BEAST and THE LION KING. Prior to these assignments he produced and directed productions at Walt Disney World, including the continuing spectacle “SpectroMagic,” otherwise known as ‘The Light Parade.’

A three-time winner of the Guinness Record for the World’s Largest Maze, Don developed a new, outdoor, family game called the “Amazing Maize Maze®.” His American Maze Company has built hundreds of projects, entertained millions of players, instigated a world-wide maze fad and has given him the label of “Father of the Corn Maze.”

After starting Town Square Productions, Inc. in 2001, he continued his managing credits for Broadway, Off-Broadway, Touring and Regional productions (see Milestones). For theme parks, Don developed and produced KATONGA for Busch Gardens, Tampa, Winner of IAAPA’s BIG E award for the Best Show in 2004. Don is also Producer/Creative Director for BELIEVE a significant re-imagining of Seaworld’s killer whale show in the Florida, Texas and California parks for the Anheuser-Busch Companies. BELIEVE is Winner of the BIG E Best Show award from IAAPA, as well as the THEA Award for Best Live Show from the Theme Entertainment Association for 2006.

In 2002, Don spoke at the International Cultural Industry Forum in Nanjing, China, beginning a dialogue on international exchange in theater and dance. He served as COO of Broadway China Ventures, developing Nederlander Worldwide Entertainment’s interests in theatrical presentation and theater management in Mainland China. Under the first joint venture endorsed by the PRC’s Ministry of Culture, Don supervised the inaugural year in China, which included the tour 42ND STREET in 9 cities to 100,000 spectators
. The 2008-09 season realized an 11-week tour of Elton John’s AIDA in China, and the co-production with the Central Academy of Drama’s FAME in mandarin in Beijing, which then toured China in 2009-2010.

Don received an MFA in Theater Management from UCLA and then served on the faculty of the Department of Theater, Film and Television. For Hyperion Press he authored the book “A Celebration of the Broadway Musical, Beauty and the Beast.”