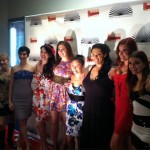 Here’s the LA cast after the final show in North Hollywood at the El Portal Theatre.  Thank you to all involved in what was a fabulous show!  The STANDING OVATIONS continued, the RAVES keep rolling in, the RED CARPET was filled with familiar and celebrity faces, the catered VIP PARTY was rockin’, and the SHOW was AMAZING!

‘DISENCHANTED! – LA’ played to another PACKED HOUSE at the 360-seat El Portal Theatre, another STANDING OVATION, and tons of AUDIENCE RAVES! Congrats and thanks to all for your continued love and support of this project headed for Off Broadway in 2013! We are SO grateful to y’all!

“I’ll be totally honest with you … I wasn’t sure what to expect. Musical theater has never been my first choice for entertainment and I know the gals of ‘DISENCHANTED!’ didn’t have that long to rehearse … so, I was holding my breath when the curtain went up.  I was worried for nothing.  Katherine Tokarz as a drunken Little Mermaid, Alex Ellis as a clueless Cinderella and the rest of the cast of ‘DISENCHANTED!’ blew the roof off the theater. The songs were hilarious ..
. all of the actresses just happened to have magnificent voices AND were hysterical. I honestly can’t wait to go back and see it tonight.” – BC, Los Angeles
===
“So So So Funny! Great job!!!! We LOVED it!!!! You princesses were hysterical and talented!!!!” – Lou Mulford (‘The Young and the Restless,’ ‘Mad Men,’ ‘History of the World: Part I’
===
“Mark my words: If they give Tony awards for Off Broadway theater, get prepared because you have a hit!” – BF, Los Angeles