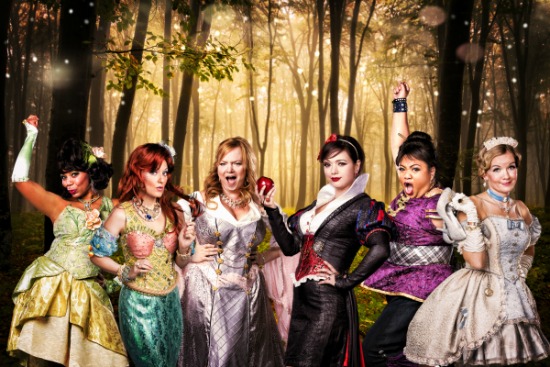 The musical features book, music and lyrics by Dennis T. Giacino, direction by Fiely A. Matias and musical staging by Matt West (Beauty and the Beast).

Poisoned apples. Glass slippers. Who needs ’em?! Not Snow White and her posse of disenchanted princesses in the new musical that’s anything but Grimm. Forget the princesses you think you know – the original storybook heroines have come back to life to set the record straight. After multiple sold-out runs nationwide, these royal renegades tossed off their tiaras to bring their hilariously subversive, not-for-the-kiddies musical to New York City – and The Big Apple will never be the same!

Sunday, January 25 marked the final performance of the 9-week limited engagement of Disenchanted! at Theatre at St. Clement’s prior to the announcement of the show’s transfer to Westside Theatre. During the initial engagement, the production defied the trend for Off-Broadway shows with its sold out performances and critical acclaim.

The ‘storybook’ journey for Disenchanted! began with an award-winning run at Orlando’s International Fringe Festival in 2011 (‘Best of Fest’ – Orlando Sentinel) followed by a sold-out run at Straz Center for the Performing Arts in Tampa, which propelled the licensing of over a dozen productions nationwide, from New Jersey to California, all of which have been met with widespread critical acclaim. Now, in addition to the sold-out New York limited engagement debut and just announced open-ended New York run, this fairy tale is going international. Productions are now slated for Latin America in summer 2015 and China’s leading commercial theatrical producer, Musical Theatre China is planning a production in Beijing in the winter of 2015/16. Domestically, AWA Partners are now booking the US National Tour for 2016.

The open-ended New York production of Disenchanted! continues with a little extra fairy dust as the move to Westside Theatre Upstairs marks producer Jonathan Pollard‘s return to the venue where his record-breaking musical I Love You, You’re Perfect, Now Change ran for an exceptional 12 years – making it the longest running musical revue in history (on or off Broadway) and spurring world-wide productions in over 16 different languages. Other recent and notable productions to play Westside Theatre include: The Vagina Monologues, Irma Vep, Full Gallop, Love Loss and What I Wore, Old Jews Telling Jokes, My Name Is Asher Lev, and Satchmo At The Waldorf.

The idea for Disenchanted! was conceived by Giacino, a former history teacher. When teaching his class about the colonial settlement at Jamestown, Virginia, he couldn’t help but wonder: What would the ‘real’ Pocahontas – a circa 1616, rough-and-tumble 10-year-old Powhatan girl – think of the fringed deer-pelt miniskirt and long, flowing hair donned by her 20-year-old counterpart in her 1995 movie comeback? A musician at heart, Giacino penned a musical number skewering the ‘princess pop culture’ that transformed Pocahontas from a revered Native American heroine into a pin-up vixen of the silver screen. Soon, Giacino found himself discovering a number of other ‘princesses’ who had been similarly wronged, and Disenchanted! was born!