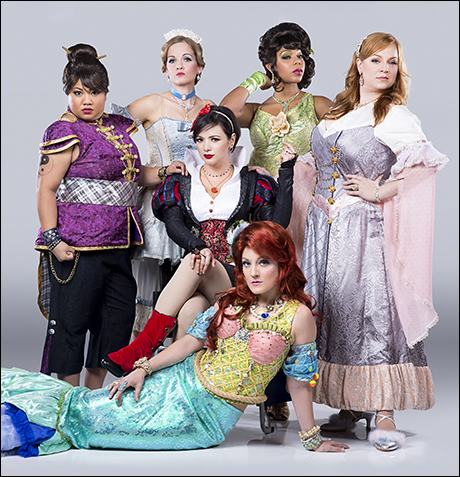 So wrote Irish poet Eavan Boland in her 1982 collection Night Feed. I’m not sure what Ms. Boland would think of the riotous, boisterous, and occasionally shrill Off Broadway production of Disenchanted!, a new musical that reinterprets our impressions of classic storybook princesses and heroines. But those looking for belting broads that celebrate womanhood’s diversity in all its sparkly and chest voice glory will be amply satisfied with the results.   With books, music and lyrics by Dennis T. Giacino, Dienchanted! begins with the trifecta of ringleader Snow White (Michelle Knight), Cinderella (Becky Gulsvig), and Sleeping Beauty (Jen Bechter) bemoaning “One More Happ’ly Ever After.” It’s clear from the get-go that these women can sing through the rafters and have the chutzpah to boot. Ms. Knight is the picture-perfect Snow White until she opens her mouth and delivers a hilarious dose of Real Housewives of New York. Ms. Gulsvig, with her ditzy, wide-eyed sensibility, might easily have been plucked of the stage of Wicked, and Ms. Bechter could be Bridget Everett’s sister.   The rest of the ensemble brings to life familiar characters from the Grimm Brothers and other Disneyfications. While lighthearted most of the time, Mr. Giacino doesn’t shy away from exploring how mainstream media has manipulated many of these familiar characters into stereotypes. Princess Badroulbadour is unfamiliar to most, but she is the basis for Princess Jasmine in Disney’s Aladdin and finally gets a star turn of her own thanks to Lulu Picart and a brilliant costume design by Vanessa Leuck, who leaves no bolt of taffeta or sequins unturned for her sparkling creations. Ms. Picart is equally entertaining as Mulan and Pocahontas.   Other guest appearances include Belle, who questions her own dialogue with inanimate objects while bound in a straightjacket; and Rapunzel, interpreted as a zaftigdominatrix who sings of being “pimped out” by “V’altDisney.” Both are portrayed by Alison Burns, who also takes on a beer-swiggin’ Little Mermaid, bemoaning that she’d “gladly dump my six-inch heels to jump back in with the Moray eels.”   Cultural diversity is also on Mr. Giacino’s agenda, saving The Princess Who Kissed the Frog (Soara-Joye Ross) for a Motown flourish that brings down the house. Ms. Ross,delivers some of the juiciest lyrics, including:

“It’s been hundres of years but, at last, it appears there’s a new girl in town and baby’s got back ‘cuz I am that storybook princess that’s finally gone black!”

From that point forward, there’s no turning back and the women are at full force, evening gloves off, and ready for a musical theater knockout. Once can’t help but be reminded of the glorious female comedians like Joan Rivers and Carol Burnett, who have undoubtedly inspired the cast. Director Fiely A. Matias keeps things moving at a brisk pace, yet allows plenty of time for camp and hilarities, as well as the creative musical staging by Matt West
. The material occasionally feels forced, but with time, hopefully the cast will settle into the spell that Disenchanted! willcertainly be casting over audiences this holiday season.