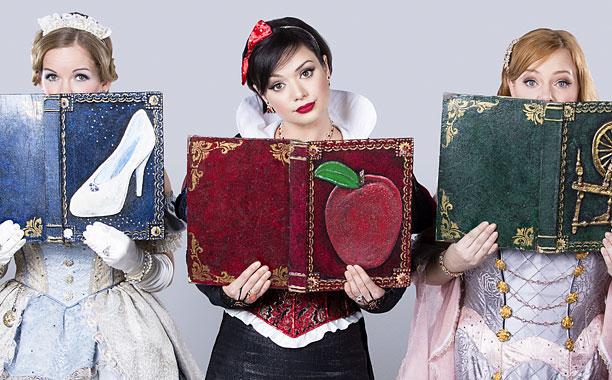 Disenchanted!—a new musical playing Off Broadway at the Theatre at St. Clement’s through Jan. 25—fancies itself a sort of Avenue Q for the princess set. The comedy, which originated in Orlando, feels like counterprogramming to the theme-park stage shows that overrun that sunny town. But unfortunately, in big bad NYC, these ladies end up as flat on the stage as their Disney counterparts on a cel. Structured as a variety show hosted by Snow White (bossy), Cinderella (ditzy), and Sleeping Beauty (boisterous when she’s not asleep), various princesses sing their tales of woe. Mulan is a not-so-traditionally-feminine princess who thinks she’s a lesbian. The Little Mermaid is—inexplicably—a drunk and bitter redneck sore over having two working legs. Belle is in a straitjacket because she’s been talking to the dishware. If these seem like cheap shots, well…they are. Disenchanted! doesn’t delve too deep even when it has good opportunities to do so. Pocahontas laments Disney not being true to her story, but her song doesn’t provide any historical context either. Instead, the character merely complains about looking like a ”porn star.” The sexualization of the Disney princesses is one of composer, lyricist, and book writer (and former Disney World staffer) Dennis T. Giacino’s key preoccupations; in one number, the bluntly-named ”Big Tits,” the princesses grumble about their chest size. It blames their design on the sexually frustrated male artists that drew them, yet paradoxically, this whole enterprise—filled with sex jokes and innuendo—was also written by a man…hmmm. Giacino has written bland, predictable songs, with sporadically clever lyrics. The game cast (led by Michelle Knight, Becky Gulsvig and Jen Bechter) sings well and mug with all they’ve got. The show, however, does not deliver on its clever premise, leaving its princesses in the lurch. A desperate ”Let It Go” reference by night’s end only highlights that Disney seems to have beaten them at their own game. C-