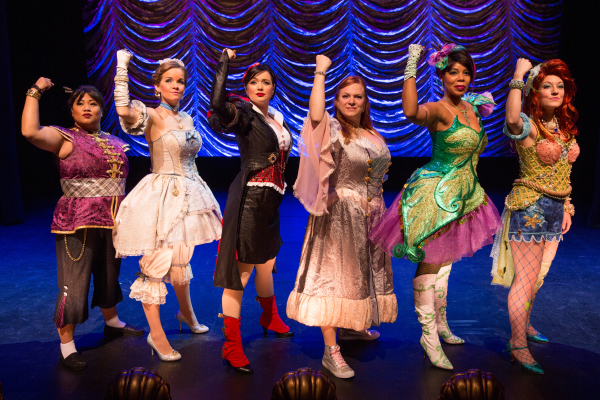 Anyone who has ever taken issue with the way female characters are depicted in animated films like Cinderella,  Beauty and the Beast, and Mulan will find Disenchanted!, now playing at the Theatre at St. Clement’s, a revelation. This musical revue dares to take on culture-shapers like Disney, and tackles the prejudices and neuroses that its characters, so the show implies, inflict on impressionable minds
. Watch any of the movies that Disenchanted! satirizes and you’ll probably realize that the show makes some good points about the kinds of biases these movies might be guilty of. But Disenchanted!‘s music and lyrics aren’t as consistently entertaining as they are edifying. The tricky thing about a show like this is getting a message across without getting bogged down by it. At issue here is something called the Princess Complex: “that age-old idea,” says show host Snow White (Michelle Knight), “in which you are only desirable and valid if you are a beauty-obsessed, ditzy, insecure, Bambi-like waif.” Snow White is not the only disgruntled party. Accompanied by a three-member band (Michael Raabe, Bobby Brennan, and Gregg Monteith), Knight and five other women treat us to their vocal stylings and comedic talents as they inhabit 10 characters who rail against animated portrayals of themselves as diffident, codependent, perfectly proportioned, heterosexual stereotypes of femininity. Knight, with her warbling soprano, gives a delightfully rowdy performance alongside the hilarious, blank-staring Becky Gulsvig as a featherbrained Cinderella and the ebullient Jen Bechter as the loudly snoring Sleeping Beauty. They and three other dynamite performers (Alison Burns, Lulu Picart, and Soara-Joye Ross) help explode the myths of characters like Belle (from Beauty and the Beast), Mulan, and Pocahontas in 13 loosely connected musical numbers with interspersed skits. Picart gets laughs with her portrayals of the latter two in songs “Without the Guy,” which suggests that Mulan is a lesbian, and “Honestly,” an indictment of the unhistorical portrayal of the famous Native-American woman. Late in the show, Ross takes the stage as The Princess Who Kissed The Frog, sending a clear message about the underrepresentation of the African-American community in the world of fairy tales. It’s probably intentional that we’ve had to wait until the last half hour of this 100-minute show to hear this formidable chanteuse belt out “Finally,” but it’s also ironic that her talents seem depressingly underrepresented in this show.   With such funny, skilled performers, it would have been great if Dennis T. Giacino’s book and lyrics (he also wrote the music) contained as much solid wit as they do politics. Director Fiely A. Matias gets in some satirical swipes at the Little Mermaid (Alison Burns), who swills beer from a bottle and vomits into a shell toilet, and Rapunzel (also Burns, in an inspired costume by Vanessa Leuck), a monstrous German dominatrix who barks out a gut-busting number, “Not V’one Red Cent.” But frankly, many of the show’s gags fall flat. Jokes contained in songs like “Big Tits” often land with a thud, and by the time we get to the eating-disorder-themed “All I Wanna Do Is Eat,” stomachs begin to churn at the triteness of the lyrics. Disenchanted! does argue convincingly for iconic characters like Belle and Sleeping Beauty, beloved as they are, to be made into piñatas, but the show’s humor would benefit from a Fairy Godmother’s magic.